At the Fish Market

In many ways, the three of us vacationing together is easier and more fun (even more fun :) than Bowie and me on our own. The responsibility is divided, and so risk tolerance increases, as does our mobility and physical prowess. Dave's been carrying Bowie in the baby carrier, but even when he's not, we're able to pick up the baby and the stroller separately and so manage shortcuts to subway and stores. Tokyo subway seems fully handicapped accessible, but the elevators are not always in the most obvious locations.

Each day, as we understand each other's needs better and grow more accustomed to the patterns of life in Tokyo, we're able to stray further from the apartment, to see and experience more neighborhoods and attractions. Olga eats a substantial breakfast in the morning. Dave wants his coffee in the afternoon. Bowie must nap and crawl. It sometimes rains in Tokyo--coming from San Francisco in the middle of a prolonged drought, we forget what that's like. Bicyclists here ride on sidewalks (we see lots of moms on bicycles with one child seated in front and one in back). Pedestrians seem to obey automobile traffic patterns and walk on the left side of the sidewalk, making window-shopping a bit tricky. Stations in the subway are marked differently--on some, arrows for walking point to the right side, on others, to the left. People who wish to stand on escalators and moving sidewalks stand on the left side; those who want to walk, do so on the right. Those who want to walk fast make a weird zigzag between the first and the second.

We've made it to two major tourist attractions so far, the Sensō-ji temple in Asakusa and, this morning, to the Fish Market. Ok, we may have only barely stepped inside the actual wholesale fish market and spent most of our time meandering the entertaining foodie stalls in the outside market area, but we did see a lot of dead fish being chopped to pieces. This is sort of the opposite of what our diving and snorkeling excursions have been about, and so we weren't hugely comfortable on the premises. That didn't prevent us from eating sashimi for brunch (the freshest, most fragrant and finely textured fish I've had anywhere). Of the three of us, Bowie held the moral line the firmest: he refused to have any fish and stuck to the noodle-like shredded radish.

Bowie's been eating noodles almost exclusively this week and breastfeeding lots. As we're approaching his one year birthday and he shows no signs of being ready to wean himself off breast milk, I'm considering my options. KellyMom.com, the website I've been using to answer my breastfeeding questions, suggests that children naturally self-wean somewhere between two and seven years of age, and that health benefits of breastfeeding do not have an expiry date. I'd love to give Bowie the option to wean himself, though I'm not sure I'm prepared to wait seven (or even two) years for him to do so.

Being on the road, if anything, has definitely strengthened our breastfeeding bond--he's been nursing for comfort in unusual places and situations, asking for the breast almost as often as he did as a newborn, every hour or two. Our Tokyo efficiency apartment comes with a full-sized crib and most nights I put him in it. But his sleep is very restless. He's teething continuously (his bottom canines are out now; we're waiting on the last set of molars), and cries out in pain in his sleep, then wakes himself up. So I take him into bed with Dave and me, which means he's nursing throughout the night. He's a strongly attached baby, and I'm starting to worry now about how these patterns will have to adjust when we get back home and I return to work. I nearly cried of joy today at the fish market when Bowie picked off a strawberry from a mochi custard dessert Dave and I shared and little by little munched all of it (he tried the mochi too, but didn't go past one bite). A child could probably survive on noodles and strawberries, right? Right.

On to the Tokyo Dome for the afternoon's adventure. It's a notable concert hall venue (the Beatles played at the Dome two years after it opened, and George Harrison recorded Live in Japan here) and an amusement park. We hear there's an awesome indoor playground there, and we can all ride the carousel too. 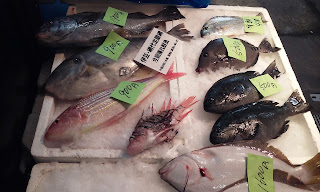 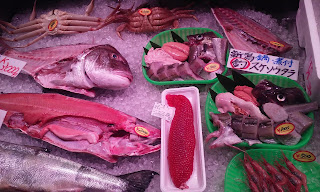